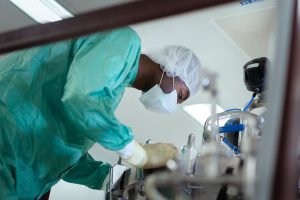 Once an ignored threat, antimicrobial resistance (AMR) – commonly known as drug resistance – has become an international priority (see ASLM’s previous article). Drug resistance impacts public health in a profound manner, leading to negative outcomes for patients and wasting valuable medicines on battles that cannot be won. Drug-resistant infections could cause 10 million deaths a year and cost up to $100 trillion a year by 2050. [1] Health officials in Africa are moving forward a stepwise approach for monitoring drug resistance in order to address this growing threat.

Integrated functional tiered laboratory networks and surveillance systems are the cornerstone of effective healthcare, and essential to the robust detection and early response to public health threats. Both the World Health Organization (WHO) and the Global Health Security Agenda (GHSA) [2] recognise the critical role played by laboratory testing in monitoring and combatting drug resistance. The African Society for Laboratory Medicine (ASLM) and the WHO’s Regional Office for Africa (WHO AFRO) recently co-convened a Regional GHSA Consultation meeting in Freetown, Sierra Leone, where discussions focused on strengthening laboratory frameworks in Africa to better prevent, detect, and respond to emerging global health threats – including drug resistance (or AMR).

“ASLM is collaborating with other partners to develop a holistic stepwise framework to coordinate laboratory-based drug resistance surveillance in Africa to fulfil the objectives of the GHSA and the WHO Global Action Plan on Antimicrobial Resistance [3], as well as to answer the call for action in the recently released Freetown Declaration,” says Dr. Trevor Peter, Chair of ASLM. “The ASLM surveillance framework provides an opportunity to unify laboratory methodology and proactively pursue a ‘One Health’ approach as suggested by WHO, the Food and Agriculture Organization of the United Nations (FAO) and World Organisation for Animal Health (OIE).” Leading author of the ASLM framework, Professor Olga Perovic from the Centre for Opportunistic, Tropical and Hospital Infections at the National Institute for Communicable Diseases in South Africa, states that “both the WHO GLASS Manual and draft ASLM framework recommend initiating drug resistance surveillance in a phased approach on selected priorities. As the ASLM framework is formalised, it is important to bring together medical and civil society across Africa to socialise and strengthen drug resistance surveillance through a stepwise approach to ensure adequate collection of baseline data, allocation of appropriate resources, and continuous education and information sharing.”

The first WHO World Antibiotic Awareness Week, 16-22 November 2015, aims to increase awareness of global antibiotic resistance and to encourage best practices among the general public, health and agriculture professionals, policy makers and governments.